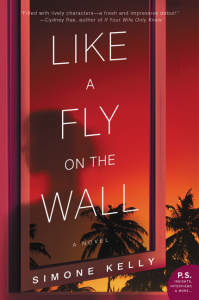 To read Simone Kelly’s debut novel, A FLY ON THE WALL (WilliamMorrow), get ready to sit back and have a good time – make sure you’re drinking some really cold because this novel is set in Miami and its hot!

Meet Jacques Berradi. Moroccan-born and Manhattan-raised, his genuine, sexy-smooth allure goes hand in hand with a unique gift. Since Jacques was young, he has had the ability to read peoples’ energies, communicate with spirit guides, and even catch glimpses of people’s futures. Now a professional “intuitive counselor,” Jacques’s clients pay him handsomely for his insight. Unfortunately, Jacques’s psychic abilities don’t come with an off switch to tune out the world’s noise, nor do they always provide him with easy answers; recently Jacques has begun having dark, alarming dreams about his beloved father, a Moroccan immigrant who died when he was a boy.

Meet Kylie Collins, an adventurous, Miami twentysomething who is trying to find her footing after being laid off from a cushy music industry job. When a mishap brings them together, Kylie is instantly mesmerized by Jacques’s cool demeanor and intuitive abilities, and he’s captivated by her outgoing charm and breezy good looks. Seeking to learn more about her family history—including the identity of the father she’s never known—Kylie visits Jacques’s office to gain some insight about her future, and about her free-spirited and headstrong Jamaican mother, True.

But on the night that they meet, a rolling blackout cuts off power throughout Miami. Kylie and Jacques, and a few of his clients, head to the only place in the neighborhood with enough light to see: Like a Fly on the Wall Detective Agency. There, Kylie serendipitously lands herself the perfect new job as an apprentice private eye.

As partners, Jacques and Kylie are an unstoppable duo. Can Jacques’s intuition reveal the scandalous history of Kylie’s mother and father? Will Kylie’s newfound detective skills uncover evidence about the death of Jacques’s father? And will the chemistry that charges their friendship bubble over into something much, much hotter…?

Several of the South Florida authors that I know, have a certain skewed view of our landscape that influences their stories, adding a distinct attitude. We live in a state that attracts all kinds of people from around the world, many times trying to escape something and that’s not always a good thing. A good part of our state is home to the Everglades, which is like stepping into some prehistoric version of  “something BC.” It’s unlike any place you’ve been. If I survive another day with the snakes, alligators, bugs, Zeka virus and bad drivers, I feel blessed. Crimes are created in South Florida, before spreading out to the rest of country (i.e. home invasions, smash and grabs). You can count on there being a South Florida angle to just about every national and international news story (i.e. Trump, “El Chapo,” Versace murder, the smuggler who was driving the truck that broke down in San Antonio). And I haven’t even mentioned the heat, which can and does strange things to a person’s mind.

My point is this: Author, Simone Kelly is a fresh voice on the south Florida publishing  landscape. She lives in the Miami area and her book, LIKE A FLY on the WALL (WilliamMorrow) is just that, we the readers are reading a story that could only take place in Florida. There are numerous quirky characters that you soon won’t forget and the plotlines are complicated, although some don’t go full circle. And again, her storylines are written from a perspective of, “I know this sounds absolutely impossible, but trust me, we’re in south Florida and this can happen.”  LIKE A FLY ON THE WALL is part of a series Kelly is writing. Being a debut author, I look forward to her prose improving, and perhaps one day joining the league of  South Florida authors such as, Sarah Gerard, Carl Hiaasen and one of our favs, Karen Russell. 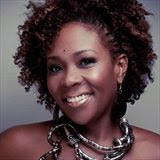 Simone Kelly, CEO of Own Your Power® Communications, Inc., is an author, internet radio host & producer, holistic business, and intuitive life coach. Her previous books include a self-help book on marketing called, Jack of All Trades, Master of None? Her second book is a novel entitled At Second Glance that set the stage for the smart and sexy Like A Fly on the Wall. She lives in the Miami area.

To find out more about Simone, visit her website.

Thanks to TLC Book Tours and William Morrow, we have one copy to giveaway. Just tell us about a quirky novel you’ve read recently. We’ll announce a winner next week.