“The first time I met Patrick Braddock, I was wearing his wife’s lipstick.”

Pretty creepy, huh? That’s the opening line of Sara Flannery Murphy’s debut novel, THE POSSESSIONS (HARPER). The psychological thriller only gets better from there.

Eurydice, known as Edie, is a “body.” She makes a living channeling the dead wives, girlfriends and daughters of grieving loved ones by wearing their discarded clothing and taking a pill called a “lotus.” This allows Edie and other “bodies” to “let go of their minds” and summon the spirits of the dead into their body. Her job at the Elysian Society is perfect, since she’s haunted by her own past and its an honest way to make a living. That is until her dull, routine life is interrupted by Patrick Braddock, who uses her to channel with his deceased wife, Sylvia.

She’s immediately attracted to Patrick and the glamorous life he’d shared with Sylvia. That’s until, she begins discovering the circumstances surrounding Sylvia’s drowning death. THE POSSESSIONS takes readers into a world of imaginative and otherworldly possibilities. That’s not necessarily a bad thing. It’s just that readers have to suspend reality, if they’re going to enjoy the whole experience of THE POSSESSIONS. It’s not science fiction, exactly. Sara Flannery Murphy has created an entirely unique and fresh genre, which is captivating.

The more questions are answered, the more fragile Edie’s own identity becomes. When she starts to confusing Sylvia’s thoughts for her own, readers realize the terrifying possibility that Edie might be permanently displaced from her life.

Nothing is better than reading a thriller and thinking you’ve figured it out. Well in the case of THE POSSESSIONS, you can kiss that hope away, because Murphy will have you wondering “WTH,” until the last page! 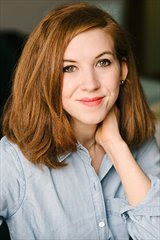 Sara Flannery Murphy grew up in Arkansas, where she divided her time between Little Rock and Eureka Springs, a small artists’ community in the Ozark Mountains. She received her MFA in creative writing at Washington University in St. Louis and studied library science in British Columbia. She lives in Oklahoma with her husband and son. The Possessions is her first novel.

Thanks to TLC Book Tours and HARPER, we have one copy of THE POSSESSIONS to giveaway. Just tell us what’s the strangest novel you’ve ever read. We’ll announce a winner Monday. Thanks and have a great week.

FYIs: “WTH” is What the Hell. The “Elysian Society” exists, although I couldn’t figure it out when I did a google search! Maybe you’ll have better luck.

19 thoughts on “THE POSSESSIONS by Sara Flannery Murphy & GIVEAWAY”