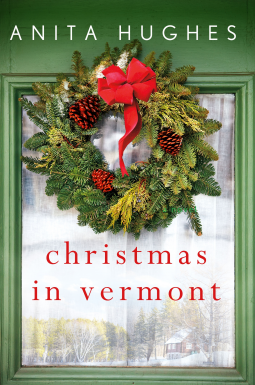 You can already feel the excitement of the upcoming fall and holidays. And with every Christmas comes a new exciting Anita Hughes novel. This fall we head off for a magical visit to Vermont for CHRISTMAS IN VERMONT (StMartinsPress).

Emma can’t believe her luck when she finds an open pawn shop on Christmas Eve in Manhattan. She’s there to sell the beautiful bracelet her ex-boyfriend gave her when a familiar looking watch catches her eye. It’s the same engraved watch she gave her college boyfriend, Fletcher, years ago. On a whim, she trades the bracelet for the watch and wonders at the timing.

Practical Emma thinks it’s just a coincidence, but her best friend Bronwyn believes it’s the magic of synchronicity that caused Emma to find the watch. Fletcher was the one that got away, and somehow Emma never quite moved on.

When Bronwyn finds out that Fletcher is in snowy Vermont at a romantic inn for the week, she can’t help but give synchronicity a push. She signs Emma up to help the inn keeper as the children’s activity coordinator. Emma agrees that a week filled with quaint shops and maple syrup would do her good… and maybe Fate really does have a Christmas gift in store for her. That is until she sees Fletcher with his daughter and fiancée.

Suddenly, the fairytale trip seems doomed to fail… much like the innkeeper’s dwindling cashflow. It will take a miracle to save her heart and the inn. And that just might be what Fate has in mind.

Anita took some time out to answer our questions!

1. Tell us about Christmas in Vermont.

CHRISTMAS IN VERMONT is about a young advertising executive named Emma. Emma discovers the watch she gave to her college boyfriend, Fletcher ten years ago at a pawn shop in Manhattan the day before Christmas. From there, she arrives at the same romantic inn where Fletcher is staying and begins to wonder whether fate brought them together to give them a second chance.

2. You do a Christmas/holiday book every year…. What’s the central theme you use?

My themes are the magic of Christmas. Christmas is a time of miracles – whether it’s the miracle of romantic love or bringing family together.

3. So excited about your movie. Who would you cast for Christmas in Vermont?

Lily James as Emma – she is my favorite actress, she’s brilliant in everything she does. And Armie Hammer as Fletcher.
FYI: Look for repeat listings of ROME IN LOVE on The Hallmark Channel.

4. What motivates you to write 2 books a year? Wow!

I really love to write. It takes me away from everything and I get to live in a fantasy world with people I create. What could be more fun?

5. Your novels are always set in sexy locations. How do you choose the setting in your books?

I think about where I would like to spend the next three months, then I imagine what it would be like for my characters to be there.

6. Tell us about your research.

Once I have worked out the characters and plot, I spend a lot of time online gazing at pictures of the location. I read-up on the culture and study local to-do guides.

7. Without giving away too much, what’s next?

I can’t say too much at the moment, but it will be Christmas and it will be somewhere wonderful!
*****

Anita Hughes was born in Sydney, Australia and had a charmed childhood that included petting koala bears, riding the waves on Bondi Beach, and putting an occasional shrimp on the barbie. Her writing career began at the age of eight, when she won a national writing contest in THE AUSTRALIAN newspaper, and was named “One of Australia’s Next Best Writers.” (She still has the newspaper clipping.)

Her debut novel MONARCH BEACH was released in June 2012, followed by MARKET STREET and LAKE COMO in 2013. FRENCH COAST and ROME IN LOVE were released in 2015.

ISLAND IN THE SEA: A MAJORCA LOVE STORY and SANTORINI SUNSETS and her first holiday novel, CHRISTMAS IN PARIS, were released in 2016.

She lives in Dana Point, CA with her family, where she interrupts her writing to watch the glorious sunsets.

Thanks to St., Martin’s Press we have one copy to giveaway. Just tell us which of Anita Hughes numerous novels is your favorite. We’ll announce a winner soon. Good luck.

55 thoughts on “CHRISTMAS IN VERMONT by Anita Hughes – INTERVIEW & Giveaway”