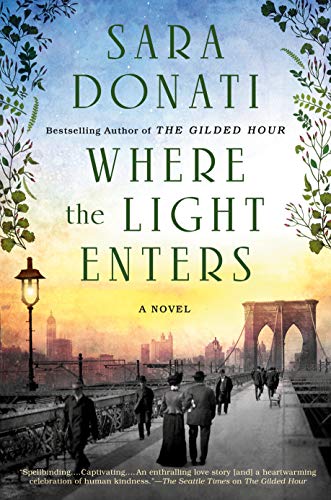 Obstetrician Dr. Sophie Savard returns home to the achingly familiar rhythms of Manhattan in the early spring of 1884 to rebuild her life after the death of her husband. With the help of Dr. Anna Savard, her dearest friend, cousin, and fellow physician she plans to continue her work aiding the disadvantaged women society would rather forget.

As Sophie sets out to construct a new life for herself, Anna’s husband, Detective-Sergeant Jack Mezzanotte calls on them both to consult on two new cases: the wife of a prominent banker has disappeared into thin air, and the corpse of a young woman is found with baffling wounds that suggest a killer is on the loose.  In New York it seems that the advancement of women has brought out the worst in some men. Unable to ignore the plight of New York’s less fortunate, these intrepid cousins draw on all resources to protect their patients.

At nearly 700 pages, plan on finding a very comfy place to read this one.

Sara Donati is the pen name of Rosina Lippi.

Rosina Lippi is a former academic and tenured university professor. Since 2000 she spends her time haunting the intersection where history and storytelling meet, wallowing in 19th century newspapers, magazines, street maps, and  academic historical research. And she never gets bored with any of it.

Sara is the author of the Wilderness series, six historical novels that follow the fortunes of the Bonner family  in the vast forests in upstate New York, from about 1792-1825.  Her newest novel about the Bonner family is The Gilded Hour. The new series  jumps ahead past the destruction of the Civil War  to follow Nathaniel and Elizabeth’s granddaughters into the twentieth century.

Under her own name Rosina writes contemporary novels (and academic work, for example here). The majority of her book reviews can be found at Goodreads; you can also find her on Facebook and Twitter (@akaSaraDonati). She lives on Puget Sound with her husband, daughter, a Havanese pupper called Jimmy Dean, and Bella, a rambunctious cat. Sara lives with Rosina and her family, but refuses to answer the phone, do windows or make herself useful in any way at all.

Thanks to Berkley we have one copy to giveaway. Just tell us what book you’re looking forward to reading this fall. We’ll announce a winner soon. Good luck.