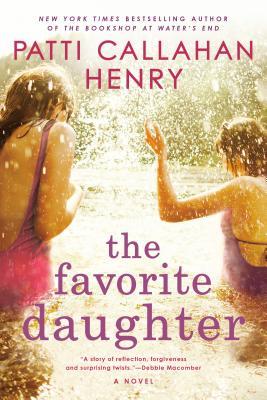 From the New York Times bestselling author of The Bookshop at Water’s End, Patti Callahan Henry offers THE FAVORITE DAUGHTER (Berkley). It’s a lush, heart-wrenching novel about the power of memory, the meaning of family, and learning to forgive.

Ten years ago, Lena Donohue experienced a wedding-day betrayal so painful that she fled the small town of Watersend, South Carolina, and reinvented herself in New York City. Though now a freelance travel writer, the one place she rarely goes is home–until she learns of her dad’s failing health.

Returning to Watersend means seeing the sister she has avoided for a decade and the brother who runs the family’s Irish pub and has borne the burden of his sisters’ rift. While Alzheimer’s slowly steals their father’s memories, the siblings rush to preserve his life in stories and in photographs. As his secret past brings Lena’s own childhood into focus, it sends her on a journey to discover the true meaning of home.

Henry’s novels always touch my heart. I’m able to relax with some lovely southern fiction and get to know characters I’d like to know in real life. I’d suggest pairing this up with a nice pinot noir.

Patti Callahan Henry is a New York Times bestselling author of fifteen novels, including the historical fiction, BECOMING MRS. LEWIS – The Improbable Love Story of Joy  Davidman and C.S. Lewis. Patti’s books include Losing the Moon, Between the Tides; Where the River Runs; When Light Breaks; Between the Tides; The Art of Keeping Secrets; Driftwood Summer; The Perfect Love Song: A Holiday Story; Coming Up for Air; And Then I Found You; The Stories We Tell; The Idea of Love, The Bookshop at Water’s End, Becoming Mrs. Lewis and The Favorite Daughter.

A finalist in the Townsend Prize for Fiction, an Indie Next Pick, an OKRA pick, and a multiple nominee for the Southern Independent Booksellers Alliance (SIBA) Novel of the Year, Patti is published in numerous languages. Her articles and essays have appeared in Southern Living, PINK, Writer’s Digest, Portico Magazine, Birmingham Magazine and more.

Her essays can also be found in anthologies and collections such as Our Prince of Scribes: Writers Remember Pat Conroy; Southern Writers Writing, and State of the Heart. Patti is a frequent speaker at luncheons, book clubs and women’s groups.

Thanks to Berkley Publishing we have one copy to give away. Just tell us what you love about “southern fiction.” We’ll announce a winner soon. Good luck.