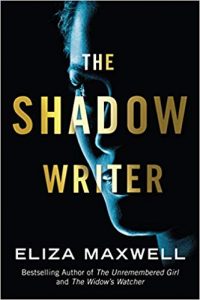 Every writer has a story. Some are deadlier than others.

In Eliza Maxwell’s new novel, THE SHADOW WRITER, we meet aspiring author Graye Templeton – who will do anything to escape the horrific childhood crime that haunts her. After a life lived in shadows, she’s accepted a new job as protégé to Laura West, influential book blogger and wife of an acclaimed novelist. Laura’s connections could make Graye’s publishing dreams a reality. But there’s more to Laura than meets the eye.

Behind the veneer of a charmed life, Laura’s marriage is collapsing. Her once-lauded husband is descending into alcoholism and ruin and bringing Laura nearer to the edge.

As the two women form a bond that seems meant to be, long-buried secrets claw their way into the present, and the line between friendship and obsession begins to blur, forcing each to decide where her loyalties lie. Running from the past is a dangerous game, and the loser could end up dead.

ELIZA TOOK SOME TIME TO ANSWER OUR QUESTIONS ABOUT WRITING.

You write crime thrillers, which are currently so popular. Why is the genre so en vogue?

Hi Cindy! Thanks so much for having me. I don’t know about anyone else, but for me, crime is such a fascinating aspect of humanity. Especially in the context of an otherwise upstanding person, and even more so when you’re talking about women, so often deemed the “gentler” sex. What factors are at play that can push a person across those lines? As readers, we can’t help but wonder, if we were put in these characters’ shoes, would we cross those lines, too?

Eliza took some time to answer our questions.

Tell us about your research process.
*grimaces* Process might be a strong word for my mess of a research file. Mostly, I begin with the story, then try not to screw up the technical aspects too noticeably. To that end, I lean on other people with far more knowledge than I possess. The internet is a great help, of course, but none of my friends or even acquaintances are safe from a probing question (or ten) about a particular profession or experience. I can be a pest, no doubt, but everyone has been very gracious about my curiosity so far. Thank goodness.
How do you approach creating characters?
Ah, yes. Characters. The poor things. I tend to give them a rough time of it. But again, I’m fascinated by the darker side of people, the one we hide from others, sometimes even hide from ourselves. My characters usually begin with their secrets, and grow around that, defined by those secrets and the lengths they’ll go to keep them.
Why/how did you become a writer?
I was a reader, first, and still primarily think of myself that way. A book mad, voracious reader, for as long as I can remember. Writing began as an extension of that… a new facet of the same love of fiction I’d always had. A little change in perspective, and an entirely new way to experience stories opened up. I was hooked.
Any tips for would be writers? Novelists?
You have to find a way to believe in yourself! I know it’s hard sometimes, but it’s so important to understand that you have a unique perspective and voice that no one else has. And it’s worth sharing. I wrote my first book just to see if I could. I had no intention of anyone ever seeing it. It was a challenge to myself at a time in my life when I was failing at everything I touched. If I could finish those three hundred pages, I’d know I could accomplish at least one task I’d set my mind to. It didn’t need to be good, much less great. It just needed to be finished. And lo and behold, one page at a time, I eventually got to THE END. And no, if you’re wondering, it wasn’t good. Not at all. But I did it, so when a little germ of an idea that felt like it had the potential to be a good idea came along a few months later, I had absolutely no doubts that I could do the work. And that was more than half the battle.
What are you currently working on?
I’m currently editing my sixth book, set to release in April 2020, called THE CARETAKERS, with Lake Union Publishing. I’m also ready to start the first draft for a seventh, as yet untitled, and I’m beyond excited about it. It’s got a bigger scope than anything I’ve written before, and it will be a challenge, but one I can’t wait to take on! 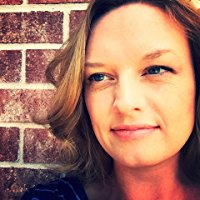 Eliza Maxwell is the author of The Widow’s Watcher, The Unremembered Girl, The Grave Tender, and The Kinfolk. She writes fiction from her home in Texas, which she shares with her ever-patient husband, two impatient kids, a ridiculous English setter, and a bird named Sarah. An artist and writer, a dedicated introvert, and a British-cop-drama addict, she enjoys nothing more than sitting on the front porch with a good cup of coffee.

Thanks to TLC Book Tours we have one copy to giveaway. Just tell us about a secret you have … of course, it’ll no longer be a secret, but we support you here at THOUGHTS ON THIS ‘n THAT.  We’ll announce a winner soon.  Good luck.

29 thoughts on “THE SHADOW WRITER by Eliza Maxwell – INTERVIEW & Giveaway”