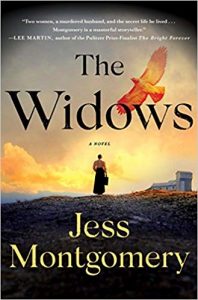 In Jess Montgomery’s THE WIDOWS (MintaurBooks), it’s Kinship, Ohio, 1924. It’s Lily Ross learns that her husband, Daniel Ross, the town’s widely respected sheriff, is killed while transporting a prisoner, she is devastated and vows to avenge his death.

Hours after his funeral, a stranger appears at her door. Marvena Whitcomb, a coal miner’s widow, is unaware that Daniel has died, and begs to speak with him about her missing daughter.

From miles away but worlds apart, Lily and Marvena’s lives collide as they realize that Daniel was not the man that either of them believed him to be–and that his murder is far more complex than either of them could have imagined.

Inspired by the true story of Ohio’s first female sheriff, this is a powerful debut about two women’s search for justice as they take on the corruption at the heart of their community. Have to love a novel with rich, strong female characters. Get ready to a wild ride!

This is the first book in the Kinship series.

We Got the opportunity to chat with Jess about her new  novel.

The inspiration for THE WIDOWS is Ohio’s true first female sheriff, Maude Collins, in 1925. She was asked to fulfill her husband’s term after he was killed in the line of duty during a traffic stop. In 1926, she was re-elected—in a landslide—as sheriff in her own right. Of course, this is a fascinating story, particularly for a woman in law enforcement in that era. But there is not any mystery to her story. There was no doubt as to who killed her husband—plenty of witnesses saw the tragedy take place. I’m a story-teller, so soon after I learned of this true story, I started wondering… what if? What if a sheriff was murdered, but no one bore witness? What if his wife was told that everyone thinks he was killed by a prisoner he was transporting, and the prisoner ran off? What if, knowing her husband as well as she does, she finds this highly unlikely? What if she then agrees to fulfill his term as sheriff, but in order to investigate on her own his murder? What if she’s faced with a difficult choice: justice for her husband (and personal vengeance) or justice for her community? As I contemplated all of those questions, Lily Ross—inspired by but wholly different from the true-life Maude—emerged as a compelling character.

I think social justice questions—about individual rights, respect for individual humanity, and community needs—are part of any era in any time. How those questions play out, or are answered, shifts continually depending on the circumstances of time and place. In THE WIDOWS, for example, the coal miners clearly want, and need, safer working practices and fairer wages. The owner of the coal mining company argues that allowing unionization and making these changes will cut into company profits—a selfish-sounding argument, but he would say that cutting profits means fewer jobs and hurts the community. And yet, the community is clearly suffering because of deaths and injuries related to unsafe coal mining operations. My father was a union leader, and so I am supportive of unions. But these particular questions are tricky and complex, and mirror Lily’s own conflicted feelings about her individual wishes and her community’s needs.

I’m fascinated by any overlooked, quirky or unusual bit of history. Historical fiction gives us the chance to not only look back, but to look at where we are—and where we’re headed—through the lens of past experiences. And I love the suspense and puzzles of mysteries. So the combination for me is irresistible—both as a reader and a writer!

I love to read about strong protagonists, particularly strong women. The strong women from father’s side of my family of origin served as inspiration for me—and for many of the supporting female characters in THE WIDOWS. My female friends are all strong women who I greatly admire. Being strong doesn’t mean being perfect, or indomitable, or unbendable, or even tougher than everyone else around you. It does mean squaring your shoulders in the face of adversity and finding the courage to continue on even when it’s tempting to simply sit down and give up. But who does that really help? So I love to write about women who are strong because they find strength, again and again, to go on in challenging situations—and come out of the experience not just stronger as individuals, but stronger in relationships and in their communities.

I do love to bake pie! I think my favorite is buttermilk pie, for several reasons. One is that I first tasted the pie at a local bakery, Woody’s, that went out of business. I couldn’t find anywhere else to find a slice of delicious buttermilk pie, so I did some research and came up with my own recipe to recreate the pie. I also love that the pie is sweet but has some tang to it, and is super simple to make but has complex flavors. Many people first react with skepticism to the notion of liking buttermilk pie, but most people do like it after they give it a chance. I like the persistence and creativity that went into developing the recipe, and the notion that if you love something, you work hard for it (like writing!)

Here is my recipe:

Combine sugar and flour. Add beaten eggs, buttermilk, melted butter, and vanilla extract. Beat together (by hand or with mixer) until smooth. Pour into pie crust. Sprinkle with nutmeg. Bake at 350-degrees (F) for 35 minutes, or until pie filling is firm like a pudding/creme pie. (Protect pie crust rim with aluminum foil near end if needed.) Let pie cool and set before slicing. Yummy as is or topped with blackberries, raspberries or strawberries.

Delicious! I’m heading into the kitchen now to do a little baking.

JESS MONTGOMERY is the Literary Life columnist for the Dayton Daily News and Executive Director of the renowned Antioch Writers’ Workshop in Yellow Springs, Ohio. Based on early chapters of The Widows, Jess was awarded an Ohio Arts Council individual artist’s grant for literary arts and the John E. Nance Writer-in-Residence at Thurber House in Columbus. She lives in her native of Ohio.

Thanks to TLC book Tours, we have one copy to giveaway. Just tell us what you appreciate about historical fiction. We’ll announce a winner soon. Good luck

29 thoughts on “THE WIDOWS by Jess Montgomery & Giveaway & Pie Recipe”