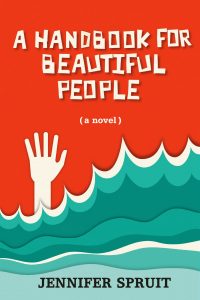 A HANDBOOK FOR BEAUTIFUL PEOPLE won the bronze IPPY Award for popular fiction, so there is some incredible talent between the pages, but don’t expect any kind of humor, unless of course you’re drawn to super dark humor. Jennifer Spruit has a distinct voice, which won’t be mixed up with any other. The characters are compelling, and the story is complex, in addition to heartbreaking. I suggest you approach reading A HANDBOOK FOR BEAUTIFUL PEOPLE expecting the unexpected.

When twenty-two year old, Marla finds herself unexpectedly pregnant, she wishes for a family, but faces an uncertain future with her talented, exacting boyfriend, Liam; constant danger from her roommate, Dani, a sometime prostitute and entrenched drug addict; and the unannounced but overwhelming needs of her younger brother, Gavin, whom she has brought home for the first time from deaf school.

Forcing her hand is Marla’s fetal alcohol syndrome, which sets her apart but also carries her through. When Marla loses her job and breaks her arm in a car accident, Liam asks her to marry him. It’s what she’s been waiting for: a chance to leave Dani, but Dani doesn’t take no for an answer.

Marla stays strong when her mother shows up drunk, creates her own terms when Dani publicly shames her, and then falls apart when Gavin attempts suicide. It rains, then pours, and when the Bow River finally overflows, flooding Marla’s entire neighborhood, she’s ready to admit that she wants more for her child than she can possibly give right now.

Marla’s courage to ask for help and keep her mind open transforms everyone around her, cementing her relationships and proving to those who had doubted her that having a fetal alcohol spectrum disorder does not make a person any less noble, wise or caring.

But for all the gloom and doom, there’s a bit of hope at the end. Imagine, the sun just starting to peak out after a horrible thunderstorm, or hurricane. I’d set aside a box of Kleenex for this one.

Jennifer Spruit was born in Lloydminster, AB/SK, and now lives in Courtenay, BC. She attended the Creative Writing MFA program at the University of British Columbia. Jennifer enjoys teaching kids, playing music, and paddling a blue canoe. This is her first novel.

Thanks to TLC Book Tours, we have one copy of A HANDBOOK FOR BEAUTIFUL PEOPLE. Just tell us the last time you read a  novel that ended up being different from what you thought it would be – in a good way! We’ll announce a winner soon. Good luck.