Inspired by true crime, Christine Lennon’s debut novel reaches back to her experience attending the University of Florida, Gainesville, in the early 1990’s. You won’t find that information anywhere in the publicity materials, but while reading THE DRIFTER (WilliamMorrow), I was taken back to a story I covered as a TV producer/reporter over twenty years ago. A serial killer, named Danny Rolling, a.k.a. “The Gainesville Ripper,” was terrorizing the UF campus, ultimately killing five students. The more I read THE DRIFTER, the more specifics I recognized from the crimes.

In her novel, THE DRIFTER, Christine sets the narrative around a  group of friends on verge of graduating from college, when their lives are permanently changed by a brutal act of violence. Elizabeth and her two BFFs, Ginny and Caroline are coeds having the time of their lives, when horrific acts ravage their campus.

The narrative travels back and forth from the main character, Elizabeth, fondly called Becky’s point of view. It’s twenty-years later, she’s in New York City, leading a wonderful life, but experiencing nightmares. Eventually, she’s forced to face her past, her role in her friend’s death and mend a broken friendship.

I’d imagine experiencing something like that in “real life” would stay with you throughout your life. You can often perceive Christine’s intimacy with the narrative in her prose. It’s to be expected that her life experience would affect her writing. 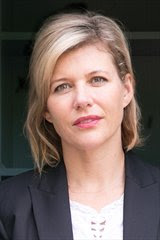 CHRISTINE LENNON is a Los Angeles based writer. Before she moved to the West Coast and started her freelance career, she was an editor at W, Vogue, and Harper’s Bazaar. Since then, she has written for publications including, T, the New York Times Style Magazine; the Wall Street Journal; Town & Country; W; Vogue; Harper’s Bazaar; Martha Stewart Living; Sunset; C California Style; Marie Claire; Self; Net-a-Porter’s Porter and The Edit online magazine—among others. Christine lives in California with her husband, Andrew Reich, and their twins. The Drifter is her first book.

Thanks to TLC Book Tours http://www.tlcbooktours.com and William Morrow Publishers, we have one copy of THE DRIFTER to giveaway. Just tell us what you’re reading. We’ll announce a winner next Monday.

If you want to read Christine’s personal account of being on the University of Florida, Gainesville campus during that terrifying time, click on this article at REFINERY29.com

17 thoughts on “THE DRIFTER by Christine Lennon & GIVEAWAY”