Three beautiful French sisters entrust an American hiker to rescue their mother high in the Alps. But what if she doesn’t want to be found?

Recently fired from his high-power finance job and dumped by his fiancée, Jim Olsen has come to the Swiss Alps to clear his head. At the charming Cabane des Audannes, he meets Clio, Thalia and Helene Castellane, who are on a quest: their mother, Calliope, has fled to these mountains to escape her cheating husband’s most recent scandal. As snow threatens to descend upon the Alps, the women have come to bring their mother home before she’s snowed in.

But the sisters are nearing the point of surrender and it’s time for them to return to Paris. Encouraged by wine and inspired by their beauty, Jim impetuously volunteers to assume the search, but soon realizes he is way over his head. The Alps are filled with beauty, as well as danger, not the least of which is Calliope’s desire not to be found. And all the while Jim finds himself haunted by the memory of her daughters and conflicted in his desire for them.

Elizabeth Birkelund’s, THE RUNAWAY WIFE, is a story of adventure, survival, romance—and of a man’s discovery of a world outside his conventional life and a new vision of himself within it.

First of all, let me start off by writing I loved Elizabeth’s novel, THE DRESSMAKER, but I didn’t quite know what to make of THE RUNAWAY WIFE.

The main character, Jim Olsen, your hearty, reliable mid-western guy, gets dumped by his fiance at the beginning and completely out of character, takes off to The Swiss Alps. Then he proceeds to continue to behave irrationally. He’s smitten by three girls, who it quickly becomes obvious are trouble. They talk him into searching for their mother in The Alps, but at best, he’s a novice climber. He’s lost his job, but now has a job waiting for him back in New York and is in no hurry to return. It’s ironic, because he’s the character that seems the most fully developed.

The sisters make an appearance at the beginning and then again at the end. Perhaps I missed something, which is very possible. The writing is fast, quirky and perfect for a lazy afternoon.

I look forward to Elizabeth’s next novel. 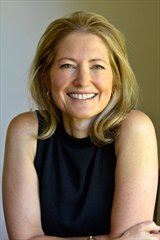 Elizabeth Birkelund is the author of one other French-inspired novel, The Dressmaker. As a freelance magazine journalist, Elizabeth was the personal finance columnist for Cosmopolitan and wrote for more than fifteen years for Working Woman, Self, and Glamour, among other publications. She lives in New York City.

Thanks to TLC Book Tours   http://www.tlcbooktours.com   and Harper Paperbacks we have one copy of THE RUNAWAY WIFE to giveaway. Just tell us something you’ve done “to clear your head”  when you’ve found yourself overwhelmed! For instance: I got on the tread mill for a quick walk and found myself still walking two hours later!

17 thoughts on “THE RUNAWAY WIFE by Elizabeth Birkelund & Giveaway”