The absolutely stunning cover of Beatriz Williams’ new novel, A CERTAIN AGE (WilliamMorrow) immediately captures your attention and transports readers back into 1920s New York City, when women were getting bolder and wearing sexier dresses, jazz was all the rage in the nightclubs and booze was flowing illegally!

Mrs. Theresa Marshall of Fifth Avenue and Southampton, Long Island, has done the unthinkable: she’s fallen in love with a much younger lover, Captain Octavian Rofrano, the Boy, as she calls him, a WWI pilot and hero of the Great War. Though the battle-scarred Octavian is devoted to his socialite and wants to marry her, Theresa resists. There is no need: she shares an understanding with her husband, Sylvo, the well-bred philanderer to whom she’s already married.

That is, until Theresa’s annoying bachelor brother, Ox, decides to tie the knot with Miss Sophie Fortescue, the naïve young daughter of a wealthy inventor. Theresa enlists Octavian to check into the background of the reclusive Fortescue family. When Octavian meets Sophie, he falls for her, even as he uncovers a devastating family secret.

Love triangles never turn out well, loyalties divide and old crimes are dragged into the open, drawing Octavian into transgression – and Theresa into making a choice. Deliciously scandalous and elegantly written, as is to be expected from a Beatriz Wiliams’ novel. Expect this to be a huge hit this summer. 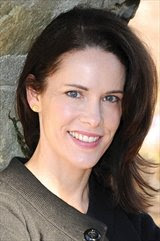 A graduate of Stanford University with an MBA from Columbia, Beatriz Williams spent several years in New York and London hiding her early attempts at fiction, first on company laptops as a communications strategy consultant, and then as an at-home producer of small persons, before her career as a writer took off. She lives with her husband and four children near the Connecticut shore.

Thanks to TLC Book Tours   http://www.tlcbooktours.com    and William Morrow, we have one copy of A CERTAIN AGE to giveaway. Just tell us what you love most about the roaring 20’s. I love the fashions! Fabulous! We’ll pick a winner Monday.

25 thoughts on “A CERTAIN AGE by Beatriz Williams & Giveaway”